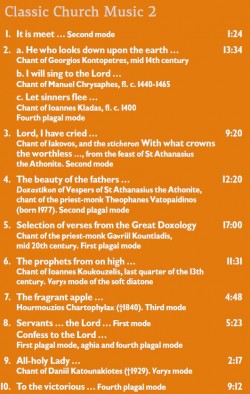 All the world’s peoples teach their own culture. The Germans teach Bach, Beethoven. We don’t have any others, we have Koukouzeles, Karykes … It is these that we must learn. But in Greece the terrible thing is that anything Western is considered to be finer.” These thoughts of the teacher Lykourgos Angelopoulos triggered the creation of a new series of publications, under the general title of Classic Church Music.

Classic Church Music is our own classical music. “Its history covers the Byzantine and post-Byzantine period, and its age-long tradition remains a living thing today, as music of the Church and a musical heritage of our people…, it is music with a philosophical position, form, and style, which retains its basic identity, constantly expands it, and is consistently recognised as unique”, in the words of the composer Michalis Adamis.

A music-lover once remarked that “in hearing the music of the angels, he realised in its boundlessness the limits of any other music”. It possesses a complete, self-contained, and effective musical system, important composers of renown, and a history of sublime art dating from the mid tenth century.

It is serious music, but is not secular. As the first music of the Christian Church, and then the music of the extensive Eastern Empire, it developed in the church, which was always the centre of life in Byzantium. This was the space in which it evolved and pioneered. This music came to prevail in a wider region in which the East met up with the Greeks and the Slavs, and is entitled to lay claim to the dimensions of a music which was ‘universal’ (Michalis Adamis).

After the Fall of Constantinople, it survived as the music of the Orthodox Church, and today serves as our church music tradition, with sublime culminations as regards the conception and the realisation of the result in sound.

Byzantine chant touches human hearts, it imprints on their depths powerful experiences, and conveys grace, consolation, and hope, in the words of Archimandrite Aimilianos Simonopetrites of the Holy Mountain, where all sing tirelessly with humility and grandeur, maintaining tradition in this “workshop of wisdom of art of over a thousand years” (Elder Moyses of the Holy Mountain).

Art with spirituality, purified in the liturgical life of the Church, “a repository and school which guards and protects and hands on our Greek language intact and pure”, as Professor Grigorios Stathis expresses it.

A musical culture, a written art form, with 7,000 music codices, supreme creations of composition, which await those who will study the theory, practice, and the servants of the cantor’s art. The presentation of these works is a duty towards our Greek civilisation.

In the times in which we live, an approach to the old style of all the phases of development of notation, musicological studies and doctoral theses, the teaching of the cantor’s art in schools and conservatoires, the recording of traditional cantors, and the preservation of the oral tradition; publication of theoretical studies based on research, of autograph and manuscript codices, CDs with items from the wealth of Byzantine and post-Byzantine masters, the holding of concerts featuring compositions which are difficult to sing in church; the existence of leading cantors who respectfully insist on the observance of the typikon, form small choirs on the model of the Great Church of Christ, sing classic chants without any showing off of vocal skills, composers who meet contemporary needs in composition, but rely on the structures and musical forms which convey the experience in composing of their predecessors, to the quests, influences, and collaborations of musicians of East and West who understand our sublime music – all these things constitute the hope, the ‘little leaven’, which is capable of conserving, but also of revitalising, a treasure with sacred value.